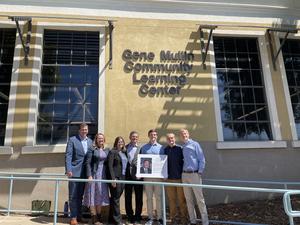 Among his former students who spoke at the event was current South San Francisco Mayor Mark Nagales, who attributed his subsequent career in public service to the elder Mullin.

“It was because of this experience of going to the city council meetings is where I first saw that one person can make a profound impact on our community and make a difference,” said Nagales.

SSFUSD School Board President John Baker relayed how he had first met Mullin in 2001 when the then-mayor of South San Francisco interviewed him for an opening on the South San Francisco Library’s board of trustees.
“After he retired, Gene was to become well-known as a council member, mayor, and assembly member, but when I think of him, I think of him as a teacher,” Baker said. “Because Gene gave so much to this community’s schools and also so much to his local government, it’s very appropriate that the Community Learning Center as a joint city and school facility is being named after him.”
In a written statement, Congresswoman Jackie Speier added: “I salute the City of South San Francisco for dedicating the center to Gene and to his impact in South San Francisco. From schools to public policy, from one generation to the next, if you know the history of Gene Mullin, you can see the impact all around. Now, we’ll be able to see it here in the center in the eyes of small kids.”
Mullin joined the South San Francisco city council in 1995, serving as mayor in 1998 and 2002 and as a state assembly member from 2002 to 2008.