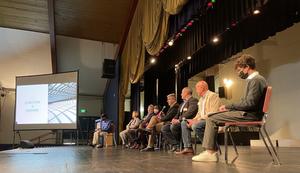 SSFUSD Superintendent Dr. Shawnterra Moore and School Board President John Baker took part in a September 2 panel discussion organized by the South San Francisco Youth Commission and the City of South San Francisco, where Baker employed the metaphor of boba tea to encourage SSFUSD students to advocate for themselves. South San Francisco Unified School District (SSFUSD) Superintendent Dr. Shawnterra Moore and Board of Trustees President John Baker sought to inspire students to get involved in local government by taking part in a September 2 panel discussion organized by the South San Francisco Youth Commission and the City of South San Francisco.
Dr. Moore said she originally wanted to become an orthopedic surgeon but fell in love with teaching while working on a temporary teaching contract.
She said one of the best things about working in education is being able to represent and advocate for children from marginalized communities.
“I thought I can come in, and I can have a voice for students who are living in marginalized communities,” said Dr. Moore. “I was one of them. I didn’t realize it at the time.”
She also shared one of her secrets to success.
“If you have some talents, if you have some gifts, cultivate that.”
Meanwhile, Baker employed the metaphor of boba tea to encourage SSFUSD students to advocate for themselves.
“You have to tell the powers that be that you want boba,” said Baker. “If you don’t have boba, you need to get out there and fight for your boba.”
Then he described the essence of public service.
“I encourage you all to make it a goal to help those who need boba get boba, because in the end that’s what public service is about: the fair and adequate distribution of boba.” What happens when you realized you only have a half-hour before you agreed to speak before the @SSF_YC’s Youth Summit, you haven’t written anything, and you’re thirsty for boba: pic.twitter.com/VlczK8fsGI