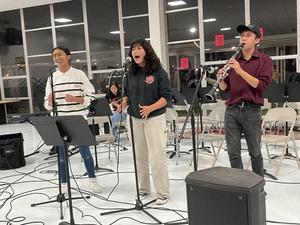 “The germ of the idea of a play-a-thon came from remembering the telethons I watched as a small kid,” said ECHS music teacher Raymond Galela, “but instead of phoning [in] a donation, they [the audience] could use a QR code.”
According to Galela, past fundraisers for the music department had generally consisted of a catered dinner, dancing, musical performance, and silent auction in the spring.
However, many of the parent volunteers who helped organize those past events had already left the school after seeing their children graduate.
Almost out of necessity, then, it seemed that the best way to ask for the community’s support would be to provide a new type of experience.
“This all stemmed from our virtual concert during distance learning and learning what recorded performances and live streaming had to offer,” Galela said. “When we came back to in-person performances, I thought this was a good way we could combine these opportunities.”
Like other fundraisers, donations received during the play-a-thon help fund activities beyond the scope of the classroom such as off-site performances, concert events, transportation, and the music program’s annual spring tour.
“Because of COVID, we haven’t really had that many fundraisers, but this one is different, because it’s on a much larger scale,” said junior Camryn Rose Valenzuela, who plays in the jazz band, “so having a big event where we pretty much perform for a lot of people and families is just a really great thing to do.”
While the play-a-thon allowed Galela’s current students to participate in the event by performing or helping out behind the scenes, it also drew in some former music students.
Kyana Orellana, who graduated from ECHS in 2015 and now moonlights with a salsa band called Agua Pura, attended the play-a-thon and even joined in with her trumpet during a set involving several recent alumni.
“It’s really great to see that music is coming back” said Orellana. “After the pandemic, these kids weren’t getting much other than what they were getting from Zoom and the internet, so it’s really cool to see all these kids engaging and creating something together.”
Scan the accompanying QR code to donate or visit: https://bit.ly/echsmusic