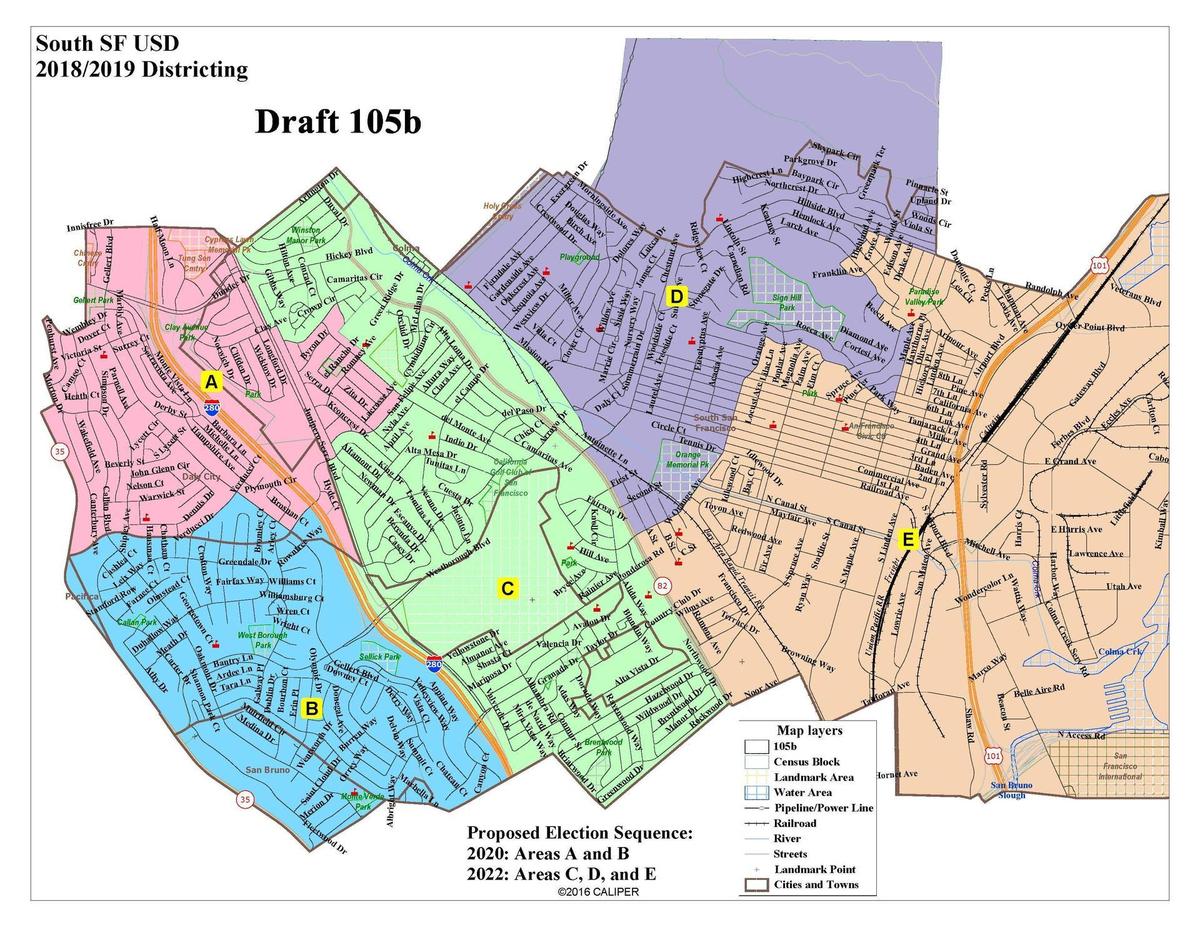 The South San Francisco Unified School District (SSFUSD) board of trustees has approved a new map for district elections that begin in 2020.
The map, which encompasses five districts with a total population of 77,916 individuals, was approved by the school board at its November 14 meeting.
It is the culmination of a two-year process to move the selection of school board members from a citywide vote to local, district elections.
“Our trustees have tried to be as equitable and transparent as possible” said SSFUSD Superintendent Dr. Shawnterra Moore. “Each of the five districts contains approximately the same number of residents as the others.”
District A occupies the northwest section of South San Francisco and extends east from Skyline Boulevard into a portion of the Serra Highlands neighborhood and north to Serramonte Boulevard.

District B sits below District A and also extends east from Skyline Boulevard to encompass the Westborough neighborhood, ending at the 280 freeway.

District E stretches across the neighborhoods of Orange Park, Lindenville, and Downtown to Paradise Valley in the north and ends all the way at the bay.

“The selected map blended the best elements of two community-submitted maps,” SSFUSD Board President John Baker said. “I think the process demonstrated that our community members understand our neighborhoods and school communities better than any demographer possibly could.”

A total of four maps were eligible for the school board’s consideration.

Two were submitted by residents, and two were proposed by the National Demographics Corporation, which SSFUSD hired to facilitate the redistricting process.

The new voting districts will be in effect for the November 2020 elections, once the final map is approved.

At the January 17, 2019 school board meeting, a public hearing was held regarding Trustee districts.
The following link provides access to an interactive map where the community can examine the proposed Trustee areas in depth.
Interactive District Map
For those who have appropriate GIS software and interested in submitting your own map please review the information provided below.
For residents with GIS software, the “shapefile” in the linked *.zip file provides the data needed to use your GIS software to review proposed maps or to draw your own map proposal.
If you do not have your own GIS mapping software, you can use the interactive review site, or the PDF maps and demographics, to review the proposed draft maps.
And feel free to sketch any desired map revisions on any printed or other maps and send that in.
For residents with GIS software, you can use the census blocks layer to carefully calculate a potential population-balanced map.

SSFUSD received two proposed maps (map #1 and map #2) from the consulting firm hired to facilitate the redistricting process at its October 10, 2019, meeting.

Local residents also contributed two maps (map #3 and map #4) they had designed over several months, using a map of district boundaries and specific parameters (e.g., population of each new district must not vary by more than 1,558 between the largest and smallest areas).